This is the definition that was in the Angonix 2016 Forum program. But instead of presenting my definition, I will start by explaining why we need to exchange points.

Starting with a simple conceptual representation of what internet access is for the user, let's assume 4 Internet Service Providers (ISPs) Motivel, Utinel and VTBaco and PAZ Fibra. These 4 providers sell internet access to their customers but they are also customers of other larger providers to whom they pay transit to have internet connectivity.

Internet without IXP or local calls

Considering international communications by optical fiber and ignoring the access network the time of "trip" of the packages (latency /delay) since the user for most of the content is on average 90ms in each direction for a total of 180ms. The latency is one of the factors of great impact in the perception of speed and quality of internet.

What if I want to talk to my neighbor?

But what happens if a Mocivel customer wants to communicate with customers Utinel or VTBaco ?? Or a PEACE Fiber movie?

It is clear from the drawing that without an alternative link between the different providers the traffic between clients that may even be neighbors will have to go around the world. And worst of all is in this case the latency times will be even worse than in the previous case with double the way to go. There will be unidirectional 180ms and bidirectional 360ms.

Communication between providers without IXP

The solution may involve a direct link between providers who feel they need to switch traffic by peering or even connect with each other.

But what happens when more 2, 3 or more providers come into the market? The famous full mesh where each provider has to have a connection to each of the other providers and the total number of connections would be n (n-1) / 2 (n = number of providers). 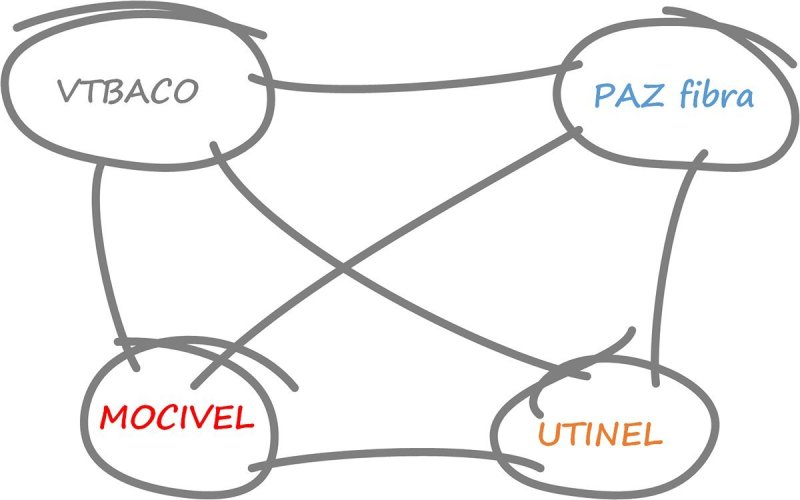 That's how I think of a IXP. A "local internet". Returning to the definition at the beginning of the post:

An Internet Exchange Point (IXP) is an interchange point that allows the interconnection of autonomous networks as well as the exchange of data and content traffic between them.

The existence of an IXP in a particular country or region makes it possible for communication between networks (not just providers) to be made through very low local latency unique local calls. Local connections, in addition to being "faster", are also cheaper, thus reducing the operational costs of providers, companies and institutions that connect to IXPs.

So why call Angolan providers if 99% of my traffic is international?

Well, in this case we bring the internet to Angola. IXP managers partner with companies that have the information we're looking for and these bring servers here to deliver the content locally. Google (= Youtube), Facebook (= Instagram), Whatsapp, Netflix, Akamai,CloudFlare, Amazon (the latest 3 are CDN's) are examples of companies that would benefit us greatly if they had content here in Angola.

With this content hosted in Angola the exchange of messages, images, videos, voice calls would be a flash.

All very beautiful but do we have any IXP in Angola? And if there is, is it worth to be connected to one of them? Yes and Yes. Actually, 2 x Yes and Yes.

Despite the great marketing of Angola Cables and Angonix An IXP already exists in Angola from 2006.

O ANG-IXP, managed by members of AAPSI (Angolan Association of Internet Service Providers), benefited from a restructuring recent and has it connected 16 members. In 2009 / 2010 the agreement with Google allowed the installation in Angola of servers Google Global Cache (GGC) allowing local access to various google services, Youtube included.

O Angonix started its operation in 16 / March / 2015, it has 11 members and various partnerships with content providers and CDNs. Although there are no exact details of what these partners are, the Angonix presented in the forum traffic statistics of 3.1 Gbps monthly average and 4.4 Gbps of peak making it in 3 the largest IXP of Africa (considering the peak) behind NIXP (Nigeria) and NAP of Africa (South Africa). Interesting is that if we consider the average traffic Angonix is ​​in fact in 2 place behind the NAP of Africa.

And the future? Will 2 IXPs continue to exist? Do you really need to have Luanda 2 IXP? I will not answer these questions.

Article originally written by Mário Pinho and can be found on your blog: mariopinho.com , republished here with the authorization of the author.