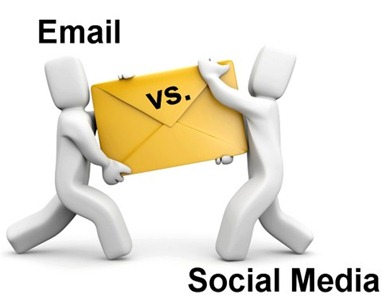 When I started to circulate through this great network, the internet, there were only two things that demanded my daily attention, the mIRC and WebMail (or Email, however). The mailbox was sacred, all my contacts in the network passed by.

6MB was a marvel, it was to keep an immensity of messages, a dream at that time. For me, the post office was one of the best inventions ever made. Ok, then we had the instant communicators, social networks and ... that chaos we see now.

But these days, who identifies with that - dependence on the post office - taking away some people? We have Facebook, Twitter, G+, Live Messenger (RIP), Skype... are so many that we would stay here for a few more minutes just to list.

The fact is that now email is practically the last resort. There is a joke circulating around to say more or less the following:

It is a vicious cycle where Email is always at a disadvantage due to the speed of other services. And understand me, quickness in the sense of having an instant communication and without "bureaucracies" ...

In an article, which you can see here, the author asks this question: "will be what we see the beginning of the end of Webmail? "

My answer would be: yes. At least it will be the beginning of the end of traditional Email. Remember Google's proposal with your Wave? Someone will come back with the same proposal, only better elaborated, write it down!

A friend who has been working in the field for a long time already (maybe you know, José S. Pereira ) made an interesting comment on the subject when he sent me the link, I'll quote:

This is something that has already happened. For the youngest, email is almost as obsolete as handwritten letters are to us, old folks.

They solve everything via scraps, tweets, msn and other bugs of the genre. Only in the corporate world are they still required to use e-mail. And to register on the social network of fashion, of course! LOL

I do not believe in something so radical (the end of the email). At least until 2012, when they said that it will end the world. But, they say, Facebook and Twitter will survive, as they are not on Earth but in the Clouds. Let's wait and see

Twitter intends to create the tip button in the application